We had a chat to one of our customers, Matt Iannucci from Swan Hill Solar & Electrical about an Off-Grid system he installed for a local business in Murray Downs NSW.

Matt’s customer purchased an old grain shed that he has converted into 6 bays with the aim of renting them as individual spaces. His customers are generally tradies that use the bays to store machinery and/or work in if weather is unkind outside. In fact, his son who is a builder uses one of the bays to build roof trusses when it’s raining outside. The problem was that when he purchased the property the sheds had no electricity.

The sheds were not connected to the grid as there previously was no need to do so. To rent out the spaces a good power source is important. Each space needed things like lighting and power points to accommodate the renter’s needs. His first option was to have them connected to the local grid. But there was an issue.

Connecting to the grid.

Connecting to the grid was not an option due to the shed’s location and distance. The sheds were located a whopping 250-metres from the existing connection. To connect it would be a large and expensive job to get done.

The solution: An Off-Grid Solar System.

It was simpler and less expensive to have his own power source. To do this he decided to have an Off-Grid Solar system installed on the property. He enlisted Matt Iannucci from Swan Hill Solar, a local Electrical company to come in and design a system for hm.

Swan Hill Solar are a local company owned by Matt Iannucci a CEC qualified Electrician and Solar Installer. Matt had already completed 3 Off-Grid systems at this stage and was starting to become a very skilled supplier of Solar power and Off-Grid systems to Swan Hill and surrounding areas.

The final design was Victron, PowerPlus Energy system supplied by Distributed Power Australia Solar and it consisted of: 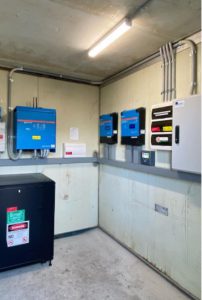 Matt had previously worked with another company before he branched out creating his own business 14 months ago. It was when working with that company that he came across Distributed Power Australia at the SEIA Vic conference and was impressed by the technical knowledge of the sales team and their genuine willingness to help answer his questions. So, he decided to give DPA Solar a go on his next installation.

It was when working on an off-Grid system using Victron inverters that Distributed Power Australia really stood out. “I came across an issue when setting up the system, so I called David. He sat on the phone for a good couple of hours helping me set up the system so when I went on site it was good to go.” Matt said.

It was that support he received from Distributed Power Australia that gave Matt the inclination to continue using them as his preferred equipment supplier when he started his own business. “I have so far designed and installed 4 Off-Grid systems. 2 of them have been in my new business, and every time David will spend several hours helping set up the system”. Matt added.

All Off-Grid Solar Systems are unique.

“No two off grid system are the same. Therefore, issues may arise, and in those times a Solar Installer needs a competent person to help them through. Distributed Power Australia spend the required time to go through the system with me.” Matt added. Distributed Power Australia also have a vast amount on-line resources and tools to help develop and install a suitable solution.

If anything goes wrong Distributed Power Australia will help

“There was a time when I made a simple mistake and I emailed David the night before I went on site to see if he could help me. He called me back and just needed 10 minutes on the phone to sort the issue out. This could have taken me hours on my own”.

Will always use Distributed Power Australia.

For more information on Swan Hill solar and Electrical go to their website www.shsolarelectrical.com.au