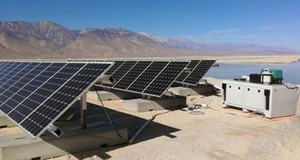 Last week DPA Solar hosted SimpliPhi CEO, Catherine Von Burg, who was down under to review SimpliPhi’s first year of battery system sales and to assess the level of demand for small-scale residential and commercial battery storage products, as well as its utility-scale solutions. Von Burg says that SimpliPhi, which has more than 7MWh of its lithium iron phosphate battery storage deployed around the world, sees “tremendous opportunities” in Australia in working with utilities and transmission companies.

And remarkably, she says she has found that Australian energy companies are “more progressive” than their US counterparts, in that they already “get” the economics of battery storage.

“Utilities here in Australia and in NZ are looking at the economics and seeing that distributed renewable generation with storage is more economical that running a new transmission line or upgrading an old transmission line”, Von Burg told RenewEconomy.

“We’re not having to convince them, or develop the economic models, because they’re already doing that,” she added.

“They’re looking at the economics of running powerlines out to remote territories and seeing the cost, and also the cost of maintenance and upgrades where temperatures are rising and fires have occurred.”

Von Burg is keen to promote the batteries’ key strength – its inherent safety, which lies in a chemistry and architecture perfected over the years.

The key, says Von Burg, is that SimpliPhi’s batteries don’t use cobalt – a cheap, and by some reports nasty, ingredient of most mass-market lithium-ion batteries that is also a major contributor to “thermal runaway” in li-ion batteries, which can cause fires.

“Our batteries don’t require ventilation or cooling, and are not dependent on toxic material.”

As a testament to this, the US Department of Defence last year confirmed that the SimpliPhi batteries it had been using in a number of deployments around the world since 2010 had scored a zero fail rate.

“So we’ve got validation,” says Von Burg. “We’re talking places like Afghanistan and Iraq where we’ve got batteries sitting in boxes in the middle of the field, in temperatures up to 49°C. They can be put anywhere.”

On cost of storage, Von Burg says that is constantly coming down for SimpliPhi Power, although the company’s products – and they have an impressive array of solutions, ranging from waist-band batteries to grid-scale and off-grid set-ups – are in the premium price range.

But she argues that in terms of levelised cost of storage, SimpliPhi’s batteries, with their long cycle life, high efficiency rate, and low risk factor, wind up having a cost per KWh lower that other batteries when measured over their lifetime.