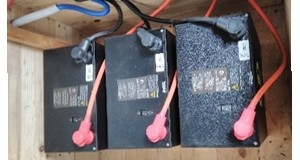 Upgrading to SimpliPhi’s advanced lithium ferrous phosphate technology is an investment that future proofs a household’s energy independence for the longer term.

Several off-grid households in western Victoria with aging and tired lead battery packs found they were having to run their generators many hours a week throughout the year.

ReEnergy in Ballarat worked with the homeowners to find a solution. Once all the options were considered, the team from ReEnergy proposed the following solution:

The customers may now expect their generators to run only after several days without sun or when their daily loads increase when visitors arrive or appliance usage changes.

One homeowner has had the SimpliPhi pack for a number of months and is now considering the addition of one more SimpliPhi OES 3.4 battery to cover larger additional loads during winter.

Simply adding another battery to an existing battery bank was never possible with lead acid batteries.

The cost of swapping from traditional lead acid batteries to the SimpliPhi battery packs is marginally higher, however the benefits offered by SimpliPhi make that extra money spent an investment in future-proofing their family’s power requirements.

Thanks again to our friends at ReEnergy in Ballarat for supplying their insights and photos.

[WPSM_INFOBOX id=887]Request a SimpliPhi sizing table here by contacting us or call +61 (3) 9696 1119. We can also supply you with other support materials and integration guides for:  Schneider, Victron, Outback and a range of other inverter brands.

Watch this video for a detailed lead replacement 24 volt installation in an extreme temperature site in the USA. The video content covers many key areas and while the site has a 24 volt install, most of the detail is the same for 48 volt battery banks.