DPA Solar, together with Simpliphi Power, are exhibiting at this year’s Australian Energy Storage Conference & Exhibition in June. 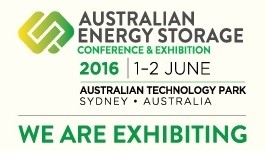 We invite you to visit our stand at this event to be held at the Australian Technology Park, Sydney. To make an appointment click here and complete the form.

Speaking at the conference will be Chris Beitel, Chief Operations Office of SimpliPhi Power.

In his role as COO, Mr Beitel runs global, manufacturing and supply chain, focusing on capacity expansion of SimpliPhi’s diverse product range. In addition, he runs the company’s sales, marketing and business development functions chartered to grow both upstream and downstream partnerships to scale the business.

First published at SimpliPhipower.com on Jan 22 2016

Here we learn about what attracted Chris Beitel to SimpliPhi Power and his plans to contribute to the company’s overall success.

What inspired you to join SimpliPhi?

I joined the company because of its impressive technology and the fact that the company is presently at an ideal stage. I personally became enamored with energy storage about two years ago. The early part of my career was in semiconductors, which was a very hot industry, and then more recently in solar, which was another exciting growth industry. I see energy storage as the missing piece of the puzzle that holds the key to displace fossil fuels.

I have an engineering background, and I’m pretty technical. Over the past six months, I’ve enjoyed researching energy storage technologies, knowing that this was the next growth sector where I wanted to be involved. First, I reviewed incumbent, or what you might call evolutionary approaches to energy storage – where new products are built from iterations of older technology. Then I had a look at some of the new upstart technologies that reportedly show great promise. But I found that when you attempt to scale them for the market, they might actually be up against the laws of physics, or end up being too expensive to make the revolutionary change they claim they could make..

I found SimpliPhi held a sweet spot in the market. It has real products and technology that has been validated over the last decade, compared to some of the upstart technologies that are really still on the drawing board when it comes to meaningful cost and scale. SimpliPhi has also innovated beyond the incumbent companies that were attempting to scale up the same lithium-ion technologies that are used in consumer electronics and electric vehicles.

When you were reviewing all of these technologies, what did you use as your criteria?

There are three elements that you need to look at for energy storage technology from a performance point of view. You need very high energy density. That is essentially the capacity and how much energy can be stored by volume or weight. The second piece is high power density, or how much power can be delivered at a given volume or weight. The third element is cycle life, analogous to the lifetime of the battery. How many times can a battery be charged and discharged? What do the profiles of those charge and discharge cycles look like? These three elements essentially serve as the performance criteria for a battery.

Various batteries might have strengths in one or two of these elements, or various batteries might have proof of concept in one of them, but zero data on the other two. When you look at SimpliPhi’s approach, I would say they have industry leading performance on all three of these characteristics. And most importantly it’s been validated in the field by over 250 customers.

Today, SimpliPhi’s cost structure is very competitive, meaning if you look at the landscape of various technologies, weigh the performance criteria and then do a levelized cost of energy analysis you see that SimpliPhi offers the best solution. But the exciting part is the company is also at relatively low scale. We know that you can reduce a company’s overall cost equation by upwards of 30 percent through economies of scale, building bigger factories, leveraging volume purchasing agreements, building more Wh per employee, etc. SimpliPhi is poised and ready to take advantage of that, which makes it a very attractive company to be a COO.

As SimpliPhi’s new COO, how do you hope to make your mark?

SimpliPhi has well established products and a loyal customer base, and it’s been extremely capital efficient getting to this point. I remember spending $50 million previously in my career to get a technology product to market. They’ve done that and more with a fraction of that funding.

So as COO, I’m looking forward to scaling our operations by expanding our manufacturing footprint here in the U.S., and with an eye toward global manufacturing. SimpliPhi is early in their journey of manufacturing capacity, and I see that we have the opportunity to reduce our manufacturing costs by a factor of two. The already proven performance plus this cost reduction path is making our products a no-brainer for the market.

What regions are most strategic for SimpliPhi?

The U.S. market is very important for SimpliPhi, as adoption for solar is high; solar has a good growth rate, is very stable, and in terms of economic factors the population can afford to be early adopters. In terms of other markets, Australia is promising because of the large amount of sunlight and the large number of people who have switched to solar. At last check, 2 million households in Australia had solar, either PV or solar thermal. That’s also because of the high cost of electricity there. So all of these factors make it very advantageous for storage. Our distribution partner there is DPA Solar and I look forward to supporting that avenue for rolling out product in Australia.

Energy storage is also trending in Europe. We saw a massive amount of solar adoption in Germany, Italy, and elsewhere, due to all the favorable subsidies. What’s happening now however is those subsidies are waning, and self-consumption is becoming more attractive for consumers who are no longer incentivized to feed excess energy back onto the electrical grid. I see energy storage as the key to continued success for commercial and industrial as well as residential solar in these markets.

Around the world, 1.3 billion people live without electricity while another 1 billion have highly unreliable access. Developing regions, like India, and large sections of Africa are on our radar, too. These are places where we will look to establish distribution partnerships.

In India, there is a lot of interest driving solar adoption, up to 20 GW by 2020. Right now only 30 percent of the population has access reliable power. There’s a huge opportunity to build microgrids and bring reliable power to India, which has the potential to change the dynamic of that whole country. I’m enamored with India as there are real opportunities to partner with distribution companies there.

You have worked in both large, publicly traded companies and small startups. What attracted you to joining another upstart company?

Both large and small companies have their benefits and drawbacks from an employee prospective. For me, the ability to control your own destiny is more straightforward in a smaller environment.

In startups, things move very fast, and it can be quite hectic, but you can also make decisions faster and take advantage of opportunities in the market. I once worked at a Fortune 500 company, where 600 people were Vice Presidents and above. The ability to reach consensus or to be nimble often proved to be difficult. It was like attempting to turn an aircraft carrier quickly. Making advantageous maneuvers is unparalleled in a small company.

That’s what makes me so excited to be joining SimpliPhi. With solid technology and the tight-knit team that has been built over the years, we’re nimble and resourceful enough to make some advantageous and strategic moves to gain significant market share over the next several years. I’m looking forward to the ride as the industry matures and the company continues to meet growing demand.

Chris was most recently executive vice president of global operations and planning at Silevo, a wholly owned subsidiary of SolarCity, where he was responsible for global operations, supply chain, sales and marketing, and played a key role in the $350M acquisition of Silevo by SolarCity. Prior to Silevo, Chris grew multiple products at Applied Materials, Inc., into billion-dollar product lines.